As we stated in our StickStar Productions release, we are upping the LoneStar Alliance coverage in 2016.  This weekend, we got our first taste as we checked in on Texas State in their first regular season game since the MCLA Championships.  While we only saw one match (Texas State vs. UNT), we were vigilant in the twitterverse keeping track of everything that went down.  Below, you will find the key scores from last weekend's action.  We have extrapolated the data, and here are our takeaways:

Busy Weekend.
In high school, teams are just warming up with some PreSeason tournies, but, in the LSA, they play  for keeps.  The amount of quality match-ups this past weekend was impressive, as was the parity in the league.

SMU goes East.
This weekend, the Mustangs took their opening weekend on the road traveling out to Baton Rouge to play Clemson and LSU.  It was a solid showing for the Ponies as they finished with two victories against solid opponents - a 10-6 win over Clemson and a 9-4 victory over LSU.  Leading the way on the offensive side of the field was TMI product and freshman, lefty, attackman, Gerrick Cantrell.  Cantrell registered 3 goals and 3 assists to pace their effort.  Next up for SMU, the Ponies welcome the Longhorns of UT to their new facility.  It should be a tremendous game for everyone on Valentine's Eve.

Texas A&M defeats UT in OT.
Texas A&M played their second overtime game in as many weeks as they knocked off the Texas Longhorns, 9-8, in extra time.  Last week, they dropped one to TCU, a team that also looks solid. We are still trying to confirm this, but we heard that AJ Hepting, a Kingwood product, apparently tied the game late and, then, won it in Ovaltine.  For UT, this is a tough way to start the new season, but they have an opportunity to rebound against SMU this weekend.  If SMU wins, that will be a huge W for the Ponies, while UT will drop to 0-2.  If UT gets the win, though, they are back on track, while SMU still has to feel good about their 2-1 record.  A&M now follows up with Baylor and Ole Miss. 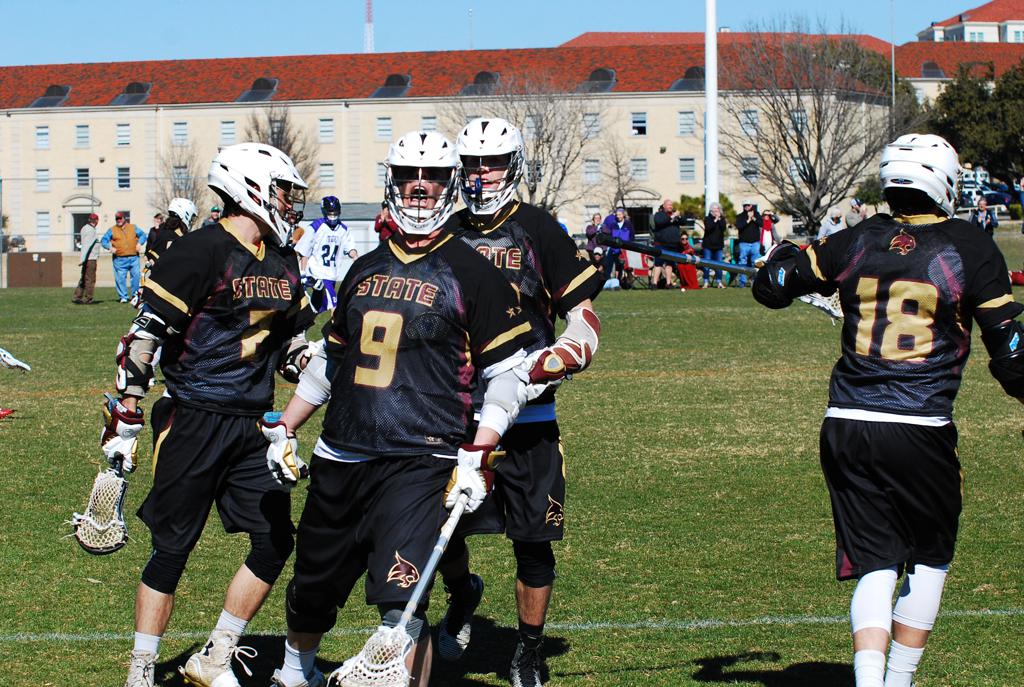 Oklahoma Splits with Alabama and Auburn.
To start the year, the Sooners traveled east to Alabama to take on the Tigers and the Crimson Tide.  On Saturday, the Sooners started with the Crimson Tide and secured a 16-10 victory.  On Sunday, though, it was tough sledding against the Tigers.  Auburn's record heading into the game was 3-0, winning each game convincingly.  OU’s Eddy Arnold tallied 6 goals and 2 assists to pace all scorers for the Sooners.

TX State finishes Dallas trip with a thrilling, last minute win against TCU.
With six seconds left, Garrett Ford tallied the final bucket to ensure an 11-10 victory for the Bobcats over the Horned Frogs.  At the half, State found themselves down 6-2 and way behind the eight ball.  During the break, adjustments were enacted as Texas State outscored TCU, 9-4, in the 2nd half.  The game went back and forth with Texas State tying it at 6 only to go down by 2 goals once again.  Again, they came back to tie at 8 and, then, went up by one.  TCU responded, as did State. Ultimately, the Frogs tied everything up at 10 with 48 seconds left.  On the ensuing faceoff, Curtis Fellenz secured the GB, and the Cats took a TO.  The rest is history.  Up next, TCU looks to rebound against LSU and Central Florida, while Texas State takes on Tennessee in a couple of weeks.

Pretty awesome.  There is tons of parity in this league this season, and everyone is solid.  We are thrilled to bring you content, and look forward to kicking off coverage in less than two weeks in College Station.  On Sunday, February 21st, we will bring you LIVE LSA ACTION when LSU travels to play A&M!

That's our first little taste of what the LSA will bring us in 2016.  We are excited!  #StickStarReport16 will bring you quality, consistent, and comprehensive coverage for the remainder of the Season. Stay dialed in by following us on Twitter or Instagram @StickStarLax and like us on Facebook.

This weekend, TexasBoxLacrosse.com teams head up to Columbus, so we will miss the Mudslinger, but we will have folks there covering it!  StickStar IS the resource for Lacrosse News in the State of Texas!  Please, stay tuned!